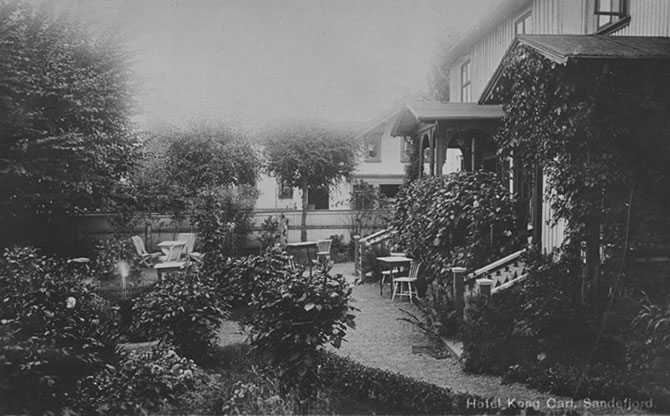 The Hotel Kong Carl is one of Norway’s oldest hotels. The main building was rebuilt in the so-called “sorenskriverstil” style around 1690. In 1720, the Danish merchant Ole Simensen Calundan bought the building as a house for himself and his family and from 1721 onwards ran a hostel in the premises.

In 1741 Paul C. Bøckman bought the building for 500 riksdaler, but being in a pinch he had to sell the place to  the shipbuilder Engvold Pedersen for 201 riksdaler at an auction in 1771. Pedersen’s widow kept “lodging for travelers and hosting” in the building and was granted permission to run such a business in 1780.

In 1813, the house was sold to the skipper and shipowner Anders Christiansen Goen for 333 1/3 of the new Riksdaler, with an obligation for the buyer to build a house for the widow and provide her with various agricultural products and other things for the rest of her life. 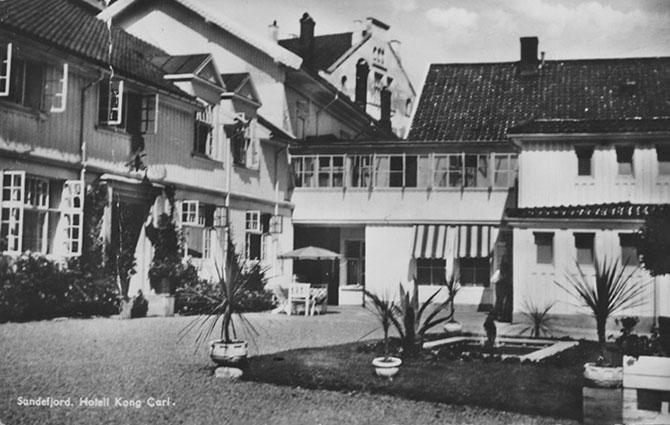 From 1887 Carl and Julie Wendt took charge of the Hotel Kong Carl, which was at that time valued at NOK 15,000. In 1884, the hotel got its own banquet hall and reception area, which also became the city’s first cinema.

In 1918, the restaurant manager aboard the “Nordenfjeldske Dampskibsselskap”, Koldevin Andresen, got a lease on the hotel, and the Andersen family owned the “King” from 1920. When Koldevin Andresen signed the lease it included, among other things, two horses with full equipment, harnesses and carts. The hotel included stables where the side building is located today, and the horses were fully catered for while the owners slept in guest rooms over the stables. The hotel employed five farm boys who, in addition to horse care, also had the task of firing up all the stoves and bringing hot and cold water for the guests’ morning care. In its time, the hotel had its own pigs that were growing fat on the hotel’s leftover food.

The son Knut Bjørn Andresen took over the hotel in 1940 and operated it until 1978. Third generation Andresen; Finn and Torunn then took over and ran the King Carl until 2006 when today’s owners took over. Finn and Torunn Andresen received the host award from the Norwegian Hotel and Restaurant Association in 1990 and the Sandefjord city conservation award in 1997.

Ole Calundan was the brother of the priest Christen Simensøn Calundan, both sons of a merchant in Kallundborg – hence their family name. The pastor was – as far as we know – not a pietist, but considered that his duties went beyond carrying out his ecclesiastical business. Admittedly, he chose a somewhat strange approach to his soul-seeking activities. In 1724, with the support of a royal decree, he took Larvik’s town bailiff along with him and went from house to house in Sandefjord, exhorting people to:

1. Live properly and suitably with one’s spouse.
2. Not house the circulation of fraudulent goods.
3. Not sell beer and spirits in the morning, and within reason in the afternoon.
4. Keep children and servants in church and school.
5. Refrain from drunkenness and not give the neighbors cause for indignation.
However, these advices did not seem to be followed in the priest’s own home. Calundan had taken a student named Ole Tidemand, son of skipper Iver Tidemand from Sandefjord, as a teacher for his children. He seduced the priest’s 13 years old daughter, so a wedding had to be arranged in a hurry. Calundan had “fortunately” passed away a few months earlier … Later, Tidemand actually became a priest in Hedrum, a provost in Bergen and even a bishop in both Bergen and Kristiansand.

In its early days, the hotel had only two toilets; one for the guests staying overnight and one for the dining guests. Eventually, one of the dining guests urgently needed to go to the toilets, only to systematically find the door closed. Finally, he bangged despairingly at the door and yelled “Do you live here?” “No, I’m just eating here” someone answered from inside.

Once, when Koldevin Andresen was running the hotel, a fishmonger placed an ordered box of crayfish in front of the main entrance. There weren’t any doubts that the goods were fresh. After a few minutes, Kirkegata and Torggata were crawling with crayfish.

For a period in the early 1900s, the hotel’s name was written with K: Hotel “Kong Karl”. This was due to changes in the way of writing, just like how the country’s capital name went from Christiania to Kristiania.

The hotel currently has 33 rooms in four categories. King Carl is part of the hotel chain UNIKE HOTELLER.